I remember my primary school Teacher (who I feel I still must refer to with a capital T since we used to have the "one and only" teacher at the time) telling us kids stories about transhumance, a long journey that the shepherds of Abruzzo made in autumn so as to lead their sheep to Puglia (Apulia) for the winter. Departure day: September 29, Michaelmas day, i.e. the feast celebrating Michael the Archangel. Return to Abruzzo: May 8, another feast honouring Michael the Archangel, more precisely his apparition on Mount Gargano in Puglia. What I did not know at the time was that transhumance, which had gone on for centuries, was by then a distant memory, and that the last shepherds were actually taking their flocks to Puglia on trucks: a one-day journey rather than three weeks on foot!

The idea of ​​those long and, why not, epic journeys has always fascinated me and tickled my imagination, so in the summer of 2013 I decided to spend an alternative holiday on foot, trying to retrace the old tratturos (the ancient shepherds' "highways"), to find out what was left of them and of transhumance.

I initially relied on the Internet to prepare for the trip, as I believed that many other hikers had already had the same experience and that it would be easy to gather information. I was totally wrong! I found only few sites talking about tratturos, often focusing (correctly) on historical aspects, but rarely providing any useful information for the organization of a journey like the one I had in mind. The situation has improved now, which is good as it means that tratturos are beginning to attract public attention.

At that time, however, I could not find suitable GPS tracks or even indications on possible accommodation. The lack of adequate information is, in fact, the reason which motivated the creation of this site. My goal is to make sure my experience is not lost and, why not, to encourage someone else to repeat it. 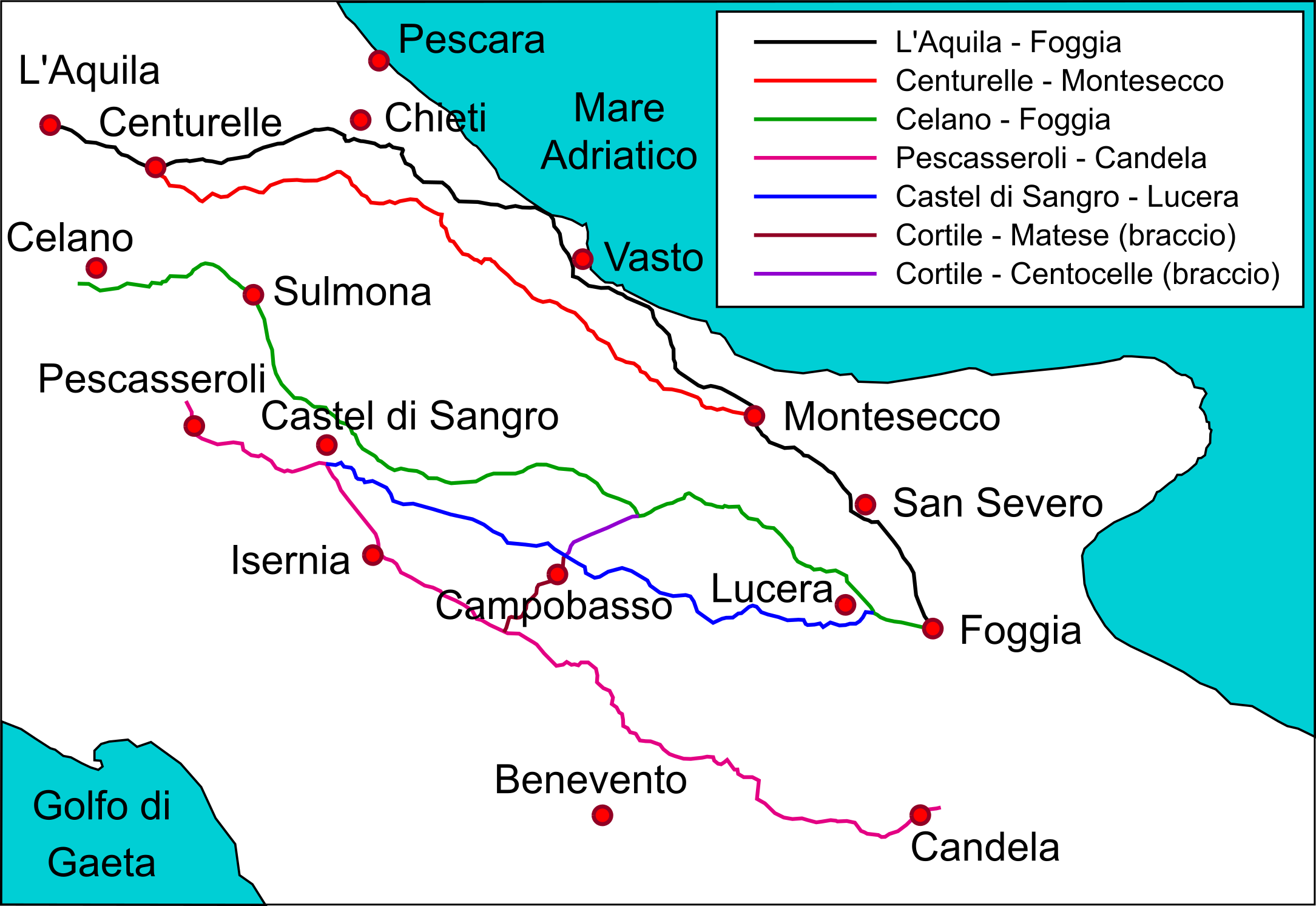 My initial idea was to follow the shepherds' footsteps along the "Tratturo Magno" (L'Aquila-Foggia), the longest tratturo. However, while preparing the GPS tracks, I noticed that the tratturo, near Vasto, runs too close to the sea. In ancient times the route was certainly very convenient for the shepherds as it is smoother. Today, however, the area is highly urbanized, so travelling long distances on asphalt would be necessary or, alternatively, making lengthy detours from the original track. This is why my attention moved to the Celano-Foggia tratturo, which runs inland.

It took me a long time to prepare for that first journey because of the scarcity of information. I calculated an initial route from the sole knowledge of the towns touched by the tratturo and by using the indications provided by old IGM (Istituto Geografico Militare, i.e. Military Geographical Institute) maps which still reported some segments of the tratturo. I then refined this initial track with the assistance of Google satellite maps and Bings maps, since the tratturo, which is no longer used for transhumance, is largely used for both public and private infrastructures. I introduced further changes to the GPS tracks due to problems related to accommodation: the tratturo crosses inland Appennine areas which are often left untouched by tourism, so there is rather limited availability of rooms.

That first journey soon came to an end. The tratturo was in awful conditions. I was expecting problems connected to the anthropization of the territory, while I had to face problems caused by the state of abandonment: in many points vegetation made it impossible to get through. The summer heat added to the struggle, and I was forced to give up halfway. 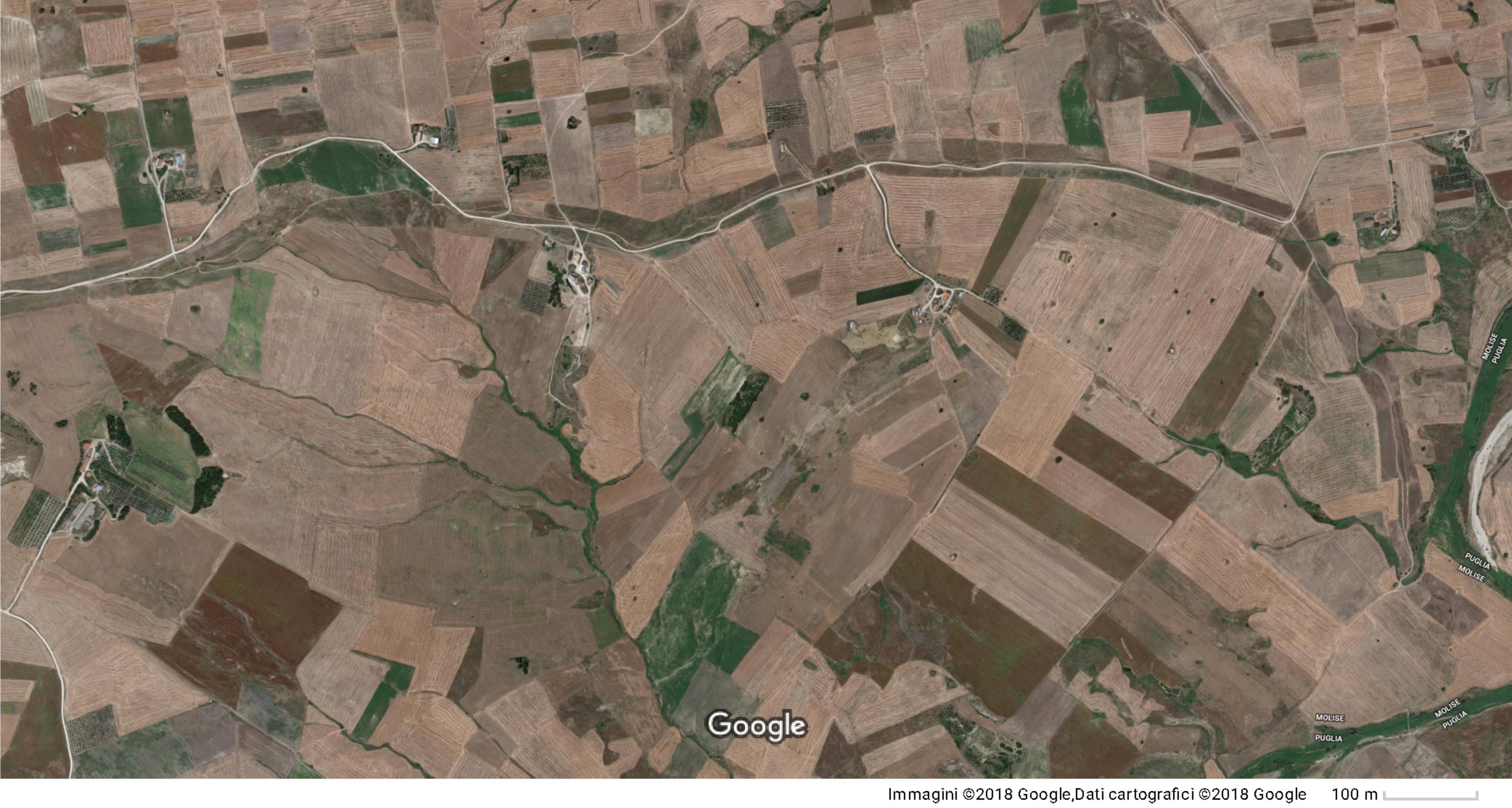 In 2017 I reconsidered the "tratturo project". My holidays were not long enough to attempt the Celano-Foggia tratturo, so the choice fell on one of the four other most important tratturos: the Castel di Sangro-Lucera tratturo. The preparation followed the same course: IGM, Google Satellite, Bings... and a little more experience.

Needless to say, I was met by basically the same situation: several paths were impassable so several detours were needed required to avoid them. This time, however, I was aware of the difficulties I would meet, so some detours and a pair of shears I was able to finish the journey despite the temperatures being even higher than the ones in my previous experience.

Was it worth it? Yes, both times. The pleasure of an "exploratory" journey is difficult to explain, when the only indications available are the ones provided by approximate GPS tracks prepared before setting off. Not to mention the typical pleasures of any "cammino": the opportunity to meet people and their stories, as well as the possibility to visit places which are not affected by mass tourism.

Purpose of the site

These pages do not want to be a guide, but rather a travel journal and an invitation to other walkers to undertake the journey: it is not easy but, at the same time, it is not particularly difficult, especially if faced in milder seasons. I was forced to walk in summer for work reasons.

The site is also for local administrators of the areas crossed by tratturos. Over the years, the number of people spending their holidays on the European camminos has increased considerably, and the phenomenon has started to have significant economic repercussions on the areas affected. Routes are often planned "on paper" and cross places which do not have any real tradition. In the case of tratturos, the situation is different. Tratturos have existed for centuries and for centuries they have represented the backbone of the economy of the Kingdom of the Two Sicilies. They are fantastic green highways which, despite being neglected, are still largely (and sometimes entirely) accessible. Therefore it is a shame that their maintenance is almost inexistent, a factor which hinders the flourishing of hikes along the tratturos: people who face the journey are often forced to deviate from the shortest path, sometimes even for many kilometres, so as to bypass short stretches blocked by vegetation. It would not take much to keep open routes that might attract tourism to areas which have so far been basically left out: with the advent of GPS-equipped phones, signs have become much less important than before (actually I personally think they are invasive), so no great investment is needed, it is more a matter of minimal maintenance!

The invitation to roll up their sleeves is obviously also extended to the people who live near the tratturos and run businesses that could benefit from a more regular tourist presence: in many cases a small group of friends equipped with shears could reopen some impassable stretches in just one day. To put it briefly, if there is no intervention from the public administration... ordinary people could make a difference anyway!